When my ankles started swelling 23 weeks into my first pregnancy, I didn't think much of it. Sure, it seemed a little early, but I felt fine otherwise and the only problem at that point seemed to be solved by a trip to DSW for a couple pairs of flats in a bigger size.

Little did I know that was the first sign that I was developing preeclampsia/ HELLP syndrome, a condition that would ultimately (after 6 days bed rest at home and 5 days bed rest at 2 different hospitals) result in the delivery of my son at 25 weeks 3 days gestation on December 1, 2006.

Fletcher William (it took us 3 days to settle on a name... what can I say, I was expecting a March baby and had just started my list) was born at 10:45 am weighing 1 lb 9 oz and measuring 13 inches in length. Midway through my stint at hospitalized bed rest, I was transferred to a hospital with a level-3 NICU in order to accommodate such a young little guy, and Fletcher has certainly taken advantage of the facilities. 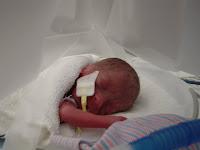 Despite the two steroid shots I was given prior to his birth, his lungs just did not have enough time to develop and he was immediately put on a ventilator and rushed to the NICU. I got a quick look at him on his way out, but I had delivered by c-section and was still on the operating table, so it was hard to get a good look. Trevor followed him up to the NICU and took this picture when Fletcher was just 2 hours old.