Not too long ago Trevor, Fletcher and I became members of a new church (well, new to us). I was brought up in a different denomination, but had gotten out of the habit of attending services. Many things have come out of Fletcher's preterm birth, and one of them has been my new appreciation in, and reliance on, my faith in God. This particular church, while much larger than what I was used to, is a good fit for our family, in part because I really enjoy the senior pastor's thought-provoking sermons (he even has his own blog), but mainly because this church has a program called Mathew's Ministry, which serves people with special needs. Although I have yet to sign Fletcher up, I can't tell you how excited I am about this program.
We arranged a Reaffirmation of Faith ceremony for Fletcher during the 10:45 service last Sunday. Procedurally it was the same as a Baptism, however we had already had Fletcher baptized in the NICU when he was four days old. This was not a good memory for me. I was still very sick, my eyesight continued to be compromised from my preeclampsia/HELLP syndrome, I had not even been allowed touched Fletcher yet, he was so tiny and fragile although he was in his "honeymoon period" so temporarily on c-pap and doing well for the moment, but still under the billi lights (which they turned off for the ceremony) and we had only named him moments before (and in truth, because he needed one to be baptized, the baptism was the sole reason we finally settled on a name). The pastor had to wear gloves and with one hand reached into the isolette and using a syringe dropped a few beads of sterile water on his tiny head and dabbed it with surgical gauze. Don't get me wrong. I am so grateful that the pastor held this ceremony and that the NICU accomodated my request. At the time, although my head was so fuzzy I don't remember a word, it had a very calming effect.
More than anything, I arranged the Reaffirmation ceremony because I wanted to replace the memories of that scary, emergency baptism with celebratory memories. I wasn't disappointed. The ceremony was touching, as the pastor explained to the thousand people or so in the congregation (I told you it was a large church) about Fletcher's early birth and his fighting spirit and the grace of God that brought him home to us. He touched on his disabilities and asked for the congregation's support and praised God for Fletcher's life and blessed him. Afterward we had a brunch at our house for some of our family and friends (including Fletcher's therapists, who are practically like family now!).
I was really too busy hosting to get any great pictures during the brunch and no flash photos were allowed in the sanctuary, but I thought I would share a few. 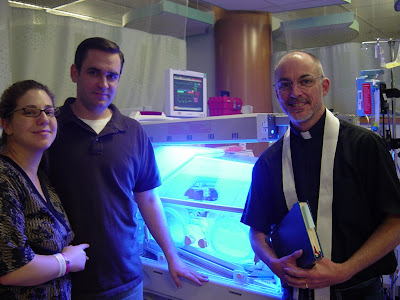 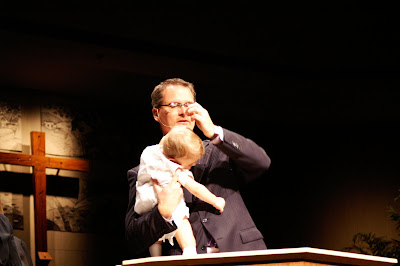 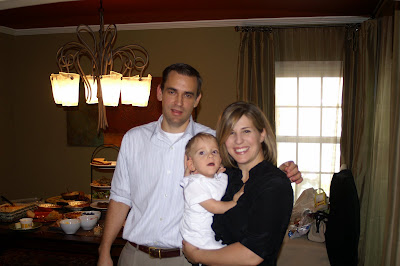 Family Photo from the Brunch
At the risk of making this last paragraph sound like an acceptance speech, I can't forget to thank Trevor's brother Todd, who flew in from Orlando, for helping to get our home party-ready. I had a big to-do list and Trevor was tied up cooking in the kitchen most of the weekend. Also, thanks to my sister, Angie, for being an awesome sponsor and also helping with the food, my mom for making the pastries, doing yard work, and watching Fletcher while I cleaned house, my brother Jay for helping Trevor in the kitchen, my brother Kenny for helping with some yard work, and my friend Kim for letting Fletcher borrow her son Gabriel's adorable christening outfit!

One of the items we bid on and won at the Friends of Infant Toddler Services Gala was a haircut at a local just-for-kids hair salon. This may seem like a luxury, but let me assure you, my poor scissor skills (seriously, I was reprimanded over this, in yearbook class, in high school) plus a kid with less-than-perfect head control, is a disaster waiting to happen. So, we decided to do it up professional-style for the First Haircut. 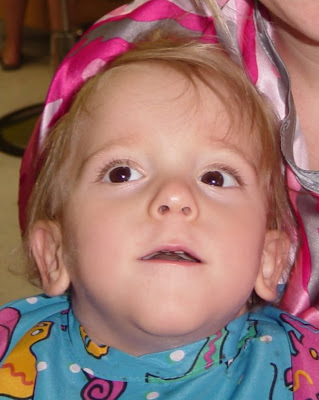 Before: My Wild Man 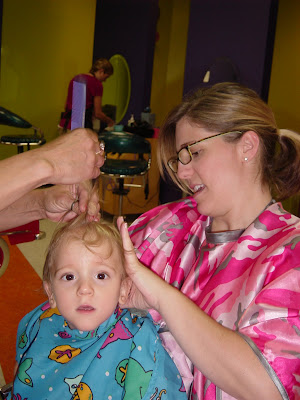 The First Cut: A Bit Apprehensive 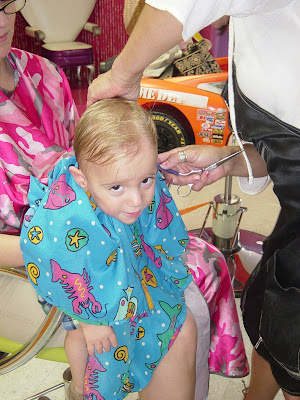 Still Not Too Sure 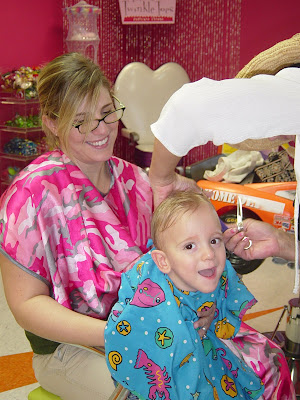 Maybe It's Not Too Bad 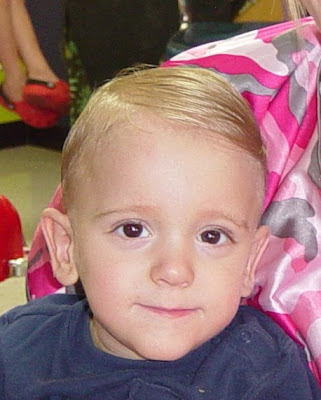 After: My Handsome Little Guy