Fletcher gave Trevor and I an awesome Christmas present by sleeping in until nearly 10 am. We went to Candlelight Service at 9 pm, so we didn't get home until late and I was up until 3 am taking care of some last minute details, so I was particularly happy with this gift. Fletcher is still a little too young to get excited by presents, so we spent a leisurely morning having breakfast and then checking out the goodies from Santa. Since Fletcher still plays with toys he got last year, and because we usually give Fletcher what he needs when we find it (remember, with kids with special needs like Fletcher, toys are typically developmental and are considered part of therapy, so if I come across something that he can play with or would like, I don't pack it away to open in December), we have begun a new family tradition and ask that Santa only bring us four gifts a piece: something we want, something we need, something to wear and something to read.
For his want Fletcher got a flat-screen computer monitor to use with our old desktop computer in order to play his favorite online games; his need was a telescoping bracket to mount the monitor on the wall in his playroom so it can be raised or lowered depending on his positioning (in his corner chair vs. stander); he got a new outfit to wear to our family holiday party this weekend; and finally a book of Christmas songs to read that also has buttons to push for the musical accompaniment, to keep mom and dad on tune. 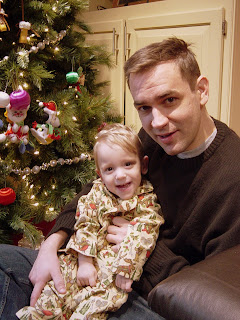 The boys posing by the tree, Fletcher in his Christmas Eve pajamas his Grandma Adams sews every year for each of her grandkids. 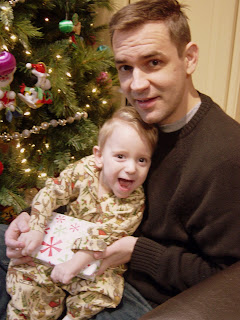 Fletcher with a death-grip on daddy's present.
Posted by Erin at 1:58 PM 8 comments: 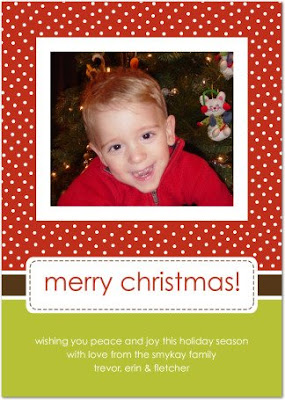 Even though his birthday is December 1st, I really consider this Fletcher's second "real" Christmas since he spent his first in the hospital, on a ventilator and drugged with morphine so he wouldn't fight the vent. Last Christmas I was terrified that RSV would land Fletcher right back on the vent, so we more or less hibernated at home.
This year I am feeling a little more confident about Fletcher's respiratory health, so I have decided to begin our Christmas traditions, including a drive through Christmas in the Park, our local Park and Rec's holiday light show, and a trip to see Santa (this year we went with cousins Trey and Michael, so of course we saw Santa at their favorite place-- Bass Pro Shop). 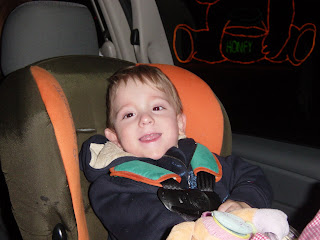 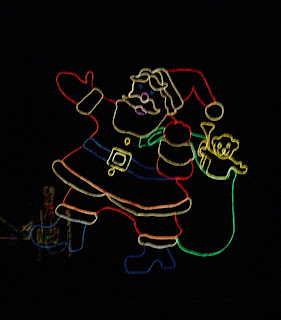 Santa at Christmas in the Park 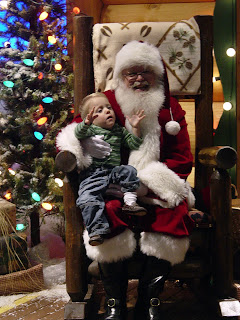 The Real Santa
(they kept using this horn to try to get the kids to look at the camera, of course this triggered Fletcher's startle reflex) 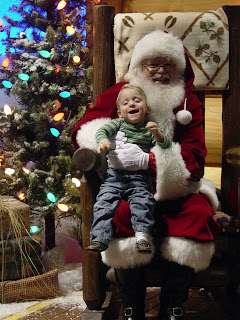 I convinced them to stop using the horn. 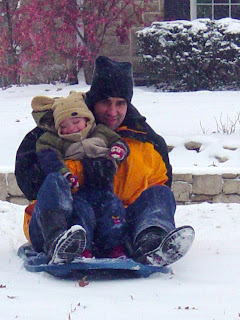 And finally, another action shot from sledding, since the one I posted apparently didn't have enough action for some people. (ha)
And to answer Catherine's question in the comments from the last post: When you sled down your driveway you really can't totally stop yourself from going into the street. We just had to make sure there was no traffic (I played photographer and look out). I would post a video I took of the trip, but I was out of batteries so I had to keep the camcorder plugged in, so all I got was a shot of Trevor's back. But in the video you can hear me telling him that I am against the driveway/street plan all together. But in the end it worked out. They went down the driveway, across the street, over the curb and down the small hill in the park across the street.
Posted by Erin at 11:18 AM 2 comments:

It snowed a few inches last night, and since Trevor is a born-and-bred south Texan, even after a few years of living in the Midwest the first snow of the season is still somewhat of a novelty to him, particularly because Fletcher is now old enough to possibly enjoy playing in it. So, as soon as the weatherman started forecasting snow, Trevor asked me to stop by Target and pick up a sled.

And, today around noon, they got to test it out... 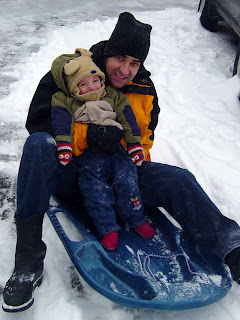 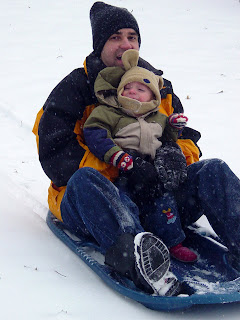 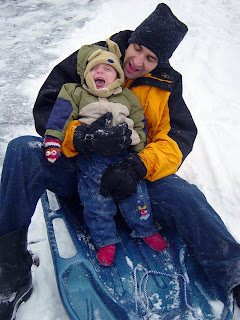 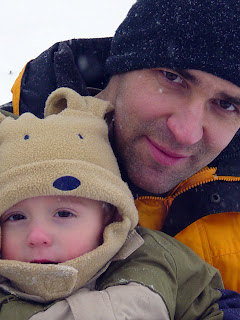 Do you think Fletch is giving me a dirty look for letting him loose with his maniac dad or for dressing him in that goofy dog hat? 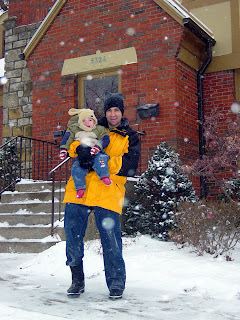 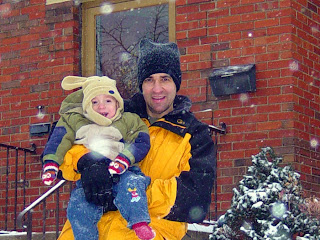 Close Up of My Adventurous Frozen Boys
For those who have been to my house, you may have recognized the starting line of the sledding adventure as our driveway. Yes, my driveway (with its roughly 20 degree slope) can double as a sledding hill. Made for a fun time today, but as you can imagine, it's not so great when trying to drive up it and into the garage after a snow or ice storm. Fletcher seemed to like sledding, and doesn't mind the cold weather, at least for short periods.

Unfortunately (or fortunately?), Trevor wasn't able to work up a whole lot of speed, and if you caught a glimpse of Fletcher riding down the two-story inflatable slide at my work party this fall, you know he is a speed demon (actually during his trips down the slide his face revealed a mix of terror and elation, but mostly the latter, at least that is what I assumed since he would squeal with delight when Trevor started climbing the stairs for another trip down the slide).
Posted by Erin at 6:22 PM 10 comments:

I can't believe my baby is two years old. Just like last year, I put together a little photo montage to chronicle Fletcher's second year. His growth obviously isn't as dramatic as it was in last year's video (although I do have to say his hair growth is, I forgot what a little baldy he used to be). I feel the need to include a disclaimer that I have recycled a lot of my favorite photos which I had already posted to this blog. There is, however, quite a few never-before-seen photos and a sweet little musical accompaniment. So, if you have 3.5 minutes to spare, click and enjoy.