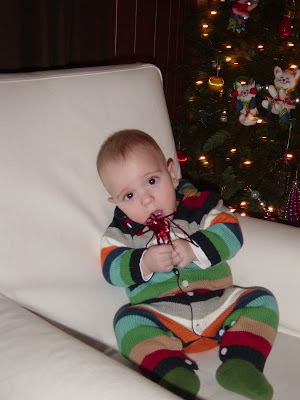 So, I have a confession. I am a horrible procrastinator. Not much of a confession to those that know me IRL, because I have been like this since the day I was born. Many times I want to post a timely post like the one above and comment on the actual day, whether it be a holiday or the anniversary of a significant day for Fletcher. But, that doesn't always happen, so I either just skip the post altogether (what typically happens) or I stay up way too late to get my post in by the midnight deadline (which is what I did for Fletcher's birthday video).

That is a thing of a past now, because I have figured out how to beat the system, so to speak. I am sure the general public using blogger realized this from the get-go, but I just figured out that you can manipulate the time and date of your post. So, for those that check this somewhat regularly, you know I didn't actually post this on New Years Day. But, a year from now when I go to print this out, I won't know any better and it will be a nice timely post as far as I am concerned. Sneaky, huh.

By the way, the photo itself was taken on New Year's Eve. Fletcher was actually awake at midnight (after a couple of hours nap earlier in the evening) but, as he illustrates in this picture, insisted on chewing on the wrong side of the noisemaker. That's okay, his five-year-old cousin made enough noise for the both of them. Who knew five-year-olds were so interested in welcoming the New Year. This girl was ready to party (unlike the adults who were in bed as soon as possible after the ball dropped).
Posted by Erin at 5:46 PM 2 comments: