But I have added pictures and more detail to our authentic Chinese restaurant experience on Trevor's Birthday. Check it out!
Posted by Erin at 10:57 PM 2 comments:

Where has the summer gone? It has been a busy one around the Smykay house.
I began the summer backlogged on blog posts, and now I am even further behind. I still need to post the run-down of Fletcher's last stem cell injection and I also wanted to write about a few of the fun things we did while in China, as well as an update post with any improvements stemming (no pun intended) from the treatment. Soon after our return Audrey was born, which I actually did manage to write about on the Smykeeney Baby blog. The three weeks or so thereafter we spent holed up in the house figuring out the whole newborn thing. Next I was treated to a really fun girls weekend when some college friends from Texas flew in to remind me that there is life beyond babies. Then came two family reunions and two road trips in opposite directions, north to northern Illinois and south to southern Texas. And in between we've managed to attend an ABR training session, get a new PT/aquatic therapist and speech therapist, and have lots of fun.
Trevor is in town for a couple of days, and my goal is to write at least one post a day during this time in an effort to catch up. Of course my other goal is to clean house... wonder which one I will get to first?
And since no post is complete without a photo or two, here are a couple of Fletcher's first experience with corn-on-the-cob. Up to this point I was a little concerned that corn would be too hard for Fletcher to chew. But we were in Dallas at Trevor's aunt's house, the corn looked great, and I thought why not try it. Never would have guessed it would be such a hit! 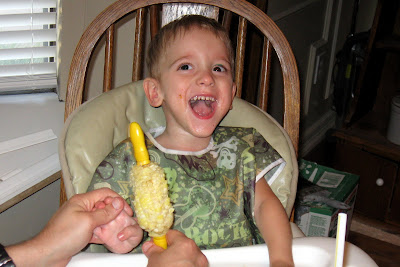 And, of course, being a "special needs momma" I can't just leave it at my son likes corn. I must turn it into therapy, so I am thinking that there may be some way to configure the cob-holder-thingies to encourage wrist supination, or at least discourage pronation, no?
Posted by Erin at 10:48 PM 4 comments: