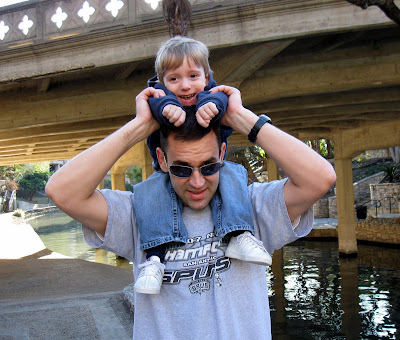 Trevor has been working a lot lately, and the last thing I should be doing while he is home is burying my nose in the computer, but I was inspired by this post by Ellen to spread a little awareness today. So inspired, in fact, that I totally plagiarized her title word. for. word. (which, apparently, is something I like to do).
I am also going to plagiarize her message, which, in a nutshell, is that people with cerebral palsy are so much more than their diagnoses. Before I had Fletcher, I had no personal experience with it. In fact, as I think I have mentioned on here before, the only person I had knowingly seen with cerebral palsy was Blair's cousin from Facts of Life. Seriously. I didn't realize that CP is just an umbrella term that refers to someone who has muscular and postural abnormalities due to brain injury, that it can be as mild as dragging a foot or as severe as to require total care for life. They have a good general overview on the Centers for Disease Control website.
True, Fletcher leans more toward the severe side than the mild at this stage in his development, and that may never change, but he is still so, so much more than his cerebral palsy. He is a bright, happy, inquisitive, social little boy and I want everyone to see that side of him. Which is why I blog in the first place.
I will never forget a comment on this blog I received from Laura (which I don't have time to go back and find to quote exactly) to the effect that reading this blog and learning about Fletcher's life made her realize for the first time that a happy and full life can coexist with a cerebral palsy diagnosis, which her son recently had received. And that is exactly the message I want everyone to hear.
Posted by Erin at 3:17 PM

Yes, totally. I think that we get SO hung up on what a disabled person can't do and they're don't seem nearly as worried about it.

Have I mentioned that I LOVE THAT KID? He is such a sweetie.

Posts like this show how people are not their diagnosis. Makes a case for person first addressing.

Copying is the severest form of flattery, eh?

I totally agree. We feel the same way about Hallie: she is autistic, but autism does not define her.

Your blog should be required reading! What great pictures and perspectives!! Thanks for sharing!
SharonK

You are such a great support for other parents. It also helps keep me going! Love your posts! (And love your son!)
Miss Kim

Just found you...sweet little boy you have. Looking forward to learning more about him. Stop by sometime. My daughter is also a spastic quad.

Great post! Your kids are gorgeous. Fletcher is doing great in the kidwalk! We love ours... it gives our Abby support where she needs it most. Just wish it had a tray.

Fun to see Audrey crawling and following Fletcher. Siblings are the best for our kids with CP, I think!

ps. I love Audrey's hats! Where'd you get them?